Brendon Ayanbadejo played in the CFL and NFL for thirteen seasons.  He was signed by the Atlanta Falcons as an undrafted free agent in 1999 and was selected to the Pro Bowl three times as a special-teams player and named to two All-Pro teams by Pro Football Weekly and the Pro Football Writers Association.  His playing career took him to the Chicago Bears and Miami Dolphins of the NFL, the Amsterdam Admirals of NFL Europe, and the Winnipeg Blue Bombers, Toronto Argonauts, and BC Lions of the CFL.  In college Ayanbadejo played college football for the UCLA Bruins.  He was first-team all-Pac-10 his senior season with four sacks against arch-rival USC’s Carson Palmer. 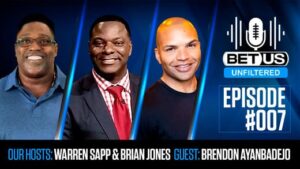